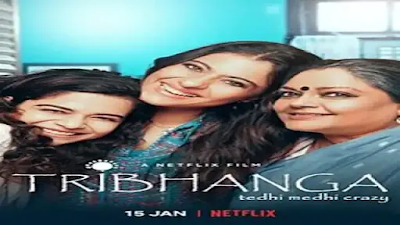 Tribhanga is an Odissi dance pose that is disjointed and asymmetrical, yet mesmerizing and sensuous, so much like the lives of the three women characters of the film – Nayan, Anu, and Masha.
A searing drama about a dysfunctional family consisting of women from three different generations.

Bollywood’s famous actress Kajol, Tanvi Azmi and Mithila Palkar have released the trailer of Tribhanga Tedhi Medhi Crazy, which is full of emotions  He Came.
In the trailer, the story of three mother-daughter is shown well. This trailer, released on the previous day, has been viewed more than 10 lakh times so far, along with social media users are also seen praising the trailer fiercely.
The bonding of Kajol, Tanvi Azmi and Mithira Palkar looks quite tremendous in the trailer. Along with this, the dialogue of the film is also excellent.
Seeing the reaction of the fans who came on the trailer of Tribhanga Tedhi Medhi Crazy, it can be said that they have liked it a lot.
It is seen in this video that Tanvi Azmi is playing the role of Kajol’s mother, while Mithila Palkar is seen playing the role of Kajol’s daughter.
When Tanvi Azmi goes into a coma at one place in the video, Kajol is asked by the media, Your mother is in a coma, how are you feeling. To this, the actress replied, “How would you feel if your mother was in a coma.”
Kajol (Tanvi Azmi and Mithila Palkar) starrer ‘Tribhanga: Tedhi Medhi Crazy’ has been written and directed by Renuka Shahane.The film will be released on January 15th To be released on Netflix.
Apart from Kajol in the film, actors like Kunal Roy Kapoor, Kanwaljeet Singh, Manav Gohil and Vaibhav Tatwadi are also going to be seen in important roles.
Talking about this film, Renuka Shahane said that Tribhanga is a Odissi is a dance posture, in which it looks beautiful even when there is no harm.In this film, the word has been used as a simile to express women.