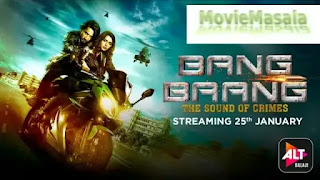 The story of Bang Baang, a ZEE5 Altbalaji Original action thriller series starring Faisal Shaikh, Ruhi Singh, Aman Gandotra, and Ayyam Mehta.
Raghu, a charming criminal, is chased by Meera, his ex-girlfriend and a police officer when he becomes the prime suspect in the murder of a princess.
Tandav Web Series

In this teaser of ‘Bang Bang‘ Mr. Faisu’s action scene and Ruhi Singh’s unmistakable style looks quite awesome.
Mr.Faisu has shared this teaser with his Instagram account, which social media users have been praising for it.
Sharing this teaser on Instagram, Mr. Faisu wrote, “Every badass boy, who has a strange style, needs a cool girl who likes to punch on his behalf.
The dialogues of the Bang Baang series with the action and thriller scenes are also tremendous.
Let me tell you that the trailer of Mr. Faisu and Ruhi Singh starrer Bang Baang will be released on January 7, which his fans are also eagerly waiting for.
Through this series, Mr. Faisu is going to debut on the digital platform.Let me tell you that Mr. Faisu had made a tremendous identity through Tiktok.
Apart from this, he is also known for his style.  Mr. Faasu has more than 1.5 crore followers on his Instagram.  So far Mr. Faasu has also appeared in many songs.  Apart from this, they also have their own vlogging channel on YouTube.